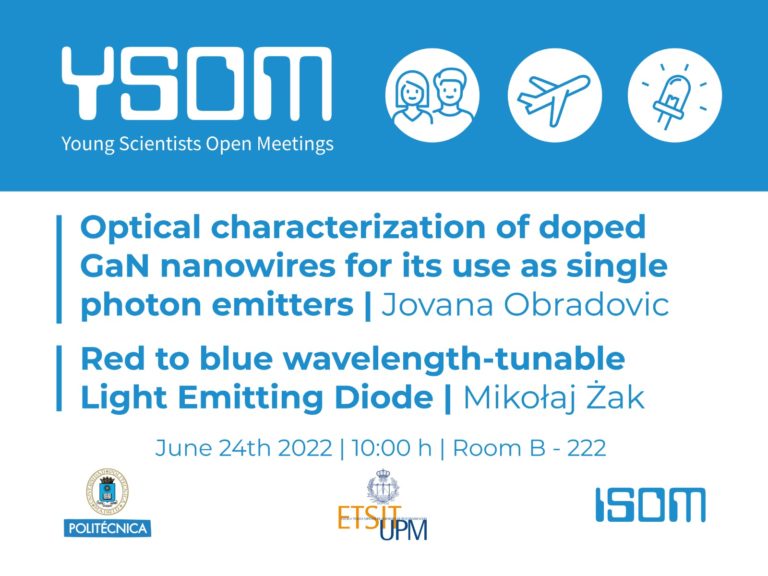 One of the current challenges in Quantum Cryptography is development of an efficient quantum light emitter (single photon source) that can work in a wide spectral range. Works until this day show that InGaN/GaN nanowires are good candidates for being a single photon source in optical circuits. For making them possible to work while exciting them electrically, it is necessary to dope them with materials such as Si and Mg. This work is mainly about the study of destruction of the crystal structure while p-doping and n-doping of the nanowires.

InGaN-based light emitting diodes (LEDs) remain under intensive investigation due to its applications in display technology. By tuning InGaN composition its energy gap can cover the entire visible light spectrum. It was also shown that it is possible to achieve tunable red, green and blue emission from single device. For this approach, authors used active region consisted of three sets of quantum wells (QWs) with various indium contents with every set separated by specially designed intermediate carrier blocking layer. This design of active region allowed authors to control the carrier injection process and resulted in the red, green and blue emission appearing under low, average and high forward currents, respectively. For dominant blue emission, however, still green and red tail remained in the spectra.
In this work we show an alternative way to obtain the fully tunable, single peak light emission in wide range of wavelength from 650 nm (red) to 480 nm (blue). Our novel design of Wavelength-Tunable Light Emitting Diode (WT LED) is based on single QW with moderate 17% indium content. To realize the emission tunability we rely on doping engineering of the active region. The 15.6 nm wide QW is heavily doped, bottom half with n-type and top half with p-type. The surrounding barriers are also doped, but at the times lower. The WT LED structure was grown by Plasma-assisted Molecular Beam Epitaxy (PAMBE). As the current density increases from 0.2 A/cm2 to 400 A/cm2, the spectrum smoothly shifts from 650 nm to 480 nm.
In the WT LED active region there is a strong interaction between the built-in polarization and electric field caused by the heavy doping. As a result the valence and conduction bands bend inside the InGaN QW in such a way that two additional separate potential minima for electrons and holes are formed. This results in decreasing the energy difference between electrons and holes ground states under small forward voltage. The wave functions are spatially separated, but there is small overlap leading to red emission. By increasing the voltage, the ground states energy difference increases, which shifts the spectra to shorter wavelengths, up to finally blue emission typical for 17% InGaN QW.
Desplazarse arriba