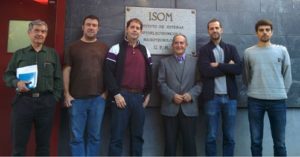 Professor Adrián Hierro, project coordinator, receives the award for the scientific relevance of the results achieved and their international impact. Link to UPM News.  Published 28.01.2020

The ZOTERAC project, developed by the professor and director of the Institute of Optoelectronic Systems and Microtechnology (ISOM) of the UPM, Adrián Hierro together with researchers Miguel Montes, José Mª Ulloa and Julen Tamayo, is the acronym for Zinc Oxide For TeraHertz Cascade Devices (Zinc oxide for cascade devices in terahertz, www.zoterac.eu) that aims to develop using semiconductor nanoengineering based on ZnO to achieve quantum cascade lasers (QCL) in terahertz (THz) that emit mW power , and quantum cascade photodetectors (QCD) also in THz, both operating at room temperature. These devices are based on the concept of quantum cascade and benefit from the unique properties of ZnO to achieve high temperature operation.

In the spectral region of the terahertz, which lies between the regions of the infrared and the microwaves, there are many materials that are semi-transparent and that can be detected, identified and analyzed. This opens the way for these non-ionizing radiation to find new applications in the medical field, where it could replace conventional X-rays for radiology, effective detection of epithelial cancer or for an improved dental image. Likewise, the ability to detect weapons and explosives even if they are hidden with paper, plastic, wood or even concrete makes THz one of the most exciting ranges of the electromagnetic spectrum.